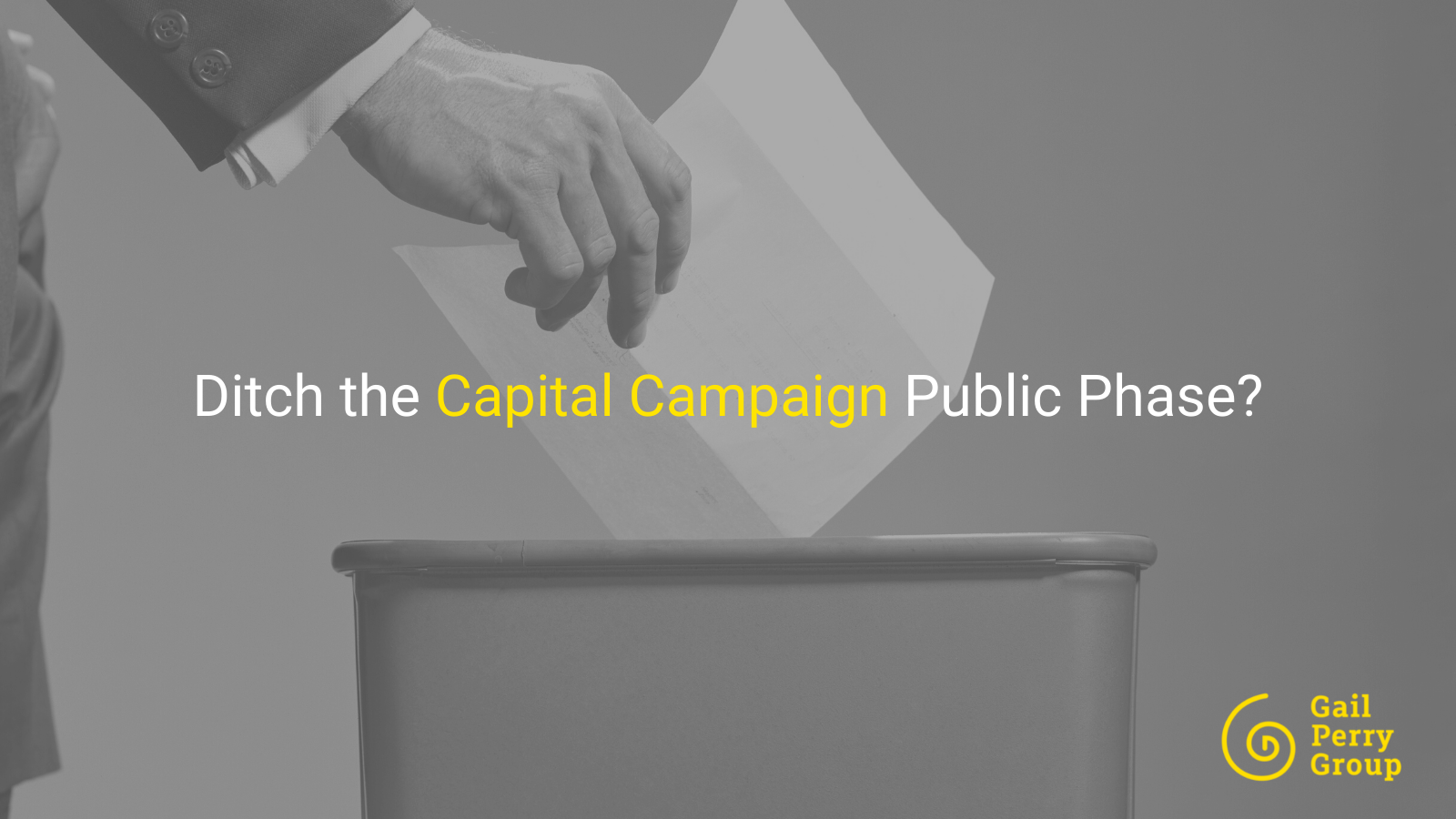 Should you cancel your capital campaign public phase?

Yes, we think this is something worth considering. Would it be possible to skip the Public Phase of your campaign without any consequence?

Here’s the challenge we all face: Public Phases are a tried-and-true part of all capital campaigns. Many people consider the Public Phase to be a generally accepted smart campaign strategy, and it’s almost heresy to consider running a campaign without a Public Phase.

Even more, most board members who are experienced in capital campaigns literally expect the consultants and staff team to follow this general framework. Most board members would take issue with the idea of not having a public phase because they like all the publicity and hoopla.

Let’s remember that the traditional phases of a capital campaign were invented 50 years ago. What worked in the 70’s and 80’s may not be the best approach for today.

You probably know, at Gail Perry Group, we are always looking for easier, better ways to reach ambitious capital campaign goals. We’re continually reinventing our campaign strategies to fit with the giving patterns of today’s donors and the volatile environment we find ourselves in.

We think there is a faster, more efficient, and less costly way to reach your capital campaign goal.

It is simply the highest and best use of your time. The cost of dollars raised in the silent phase is very low, especially compared with the cost per dollar raised in a public, mass solicitation campaign.

The Public Phase is Too Much Work

The Public Phase is a high-effort fundraising initiative. It’s challenging to a campaign-weary team. Even more, this type of fundraising is expensive – both in terms of time and money.

The traditional purpose of the Public Phase was to raise that last little bit of money you need to make a campaign goal. That’s when everyone – your stakeholders, all smaller donors, volunteers perhaps, are asked to pitch in with a generous gift in order to complete the campaign goal.

It’s a broad-scale effort with direct mail, social media, digital appeals, and even personal asks. But look at the cost to raise this money. It’s expensive. And, it requires lots of staff time and expertise.

Here’s the truth: you can reach – and exceed – your campaign’s financial targets without a laborious public phase. And in fact, we are crafting campaign plans for our clients that do just that.

It’s been interesting to watch: our clients are reaching and exceeding their goals while they are still in the Silent Phases of their campaigns.  They did not see the need for a mass solicitation of all their donors, preferring to focus on these donors with annual fundraising appeals.

How to Avoid the Public Phase

Simply run the numbers. What kind of gift projections can you estimate? Are you using a Campaign by the Numbers approach?

You should be closely tracking your progress. The data on your current and planned cultivation strategies will reveal what to expect in the future.

How many gifts are you projecting, and when do you think they may close? Your campaign pipeline can tell you whether – and when – your capital campaign goal may be in reach.

Wait and see. Keep postponing your official campaign announcement, while you continue to work privately with your lead and major donor prospects.

Habitat for Humanity Exceeded Its Goal with Only a Silent Phase

Our client, Habitat for Humanity in Knoxville, TN, followed our advice and decided not to hold a Public Phase. And – they have exceeded their campaign goal significantly, and with only 65 donors!

Angie Sledge, Habitat’s Chief Development Officer who is the internal campaign director, knows her stuff. With our guidance, she identified, prioritized, and focused on her most likely donors.

At this point, with her initial goal already reached, she has even identified an additional $2 million in her pipeline of possible/probable gifts. Her campaign may close, at almost twice what the feasibility study initially projected – all without a mass solicitation of a Public Phase.

Bottom Line: Yes, It Is Possible to Reach an Ambitious Capital Campaign Goal Without a Public Phase

Get in touch
The Three Phases of a Capital Campaign