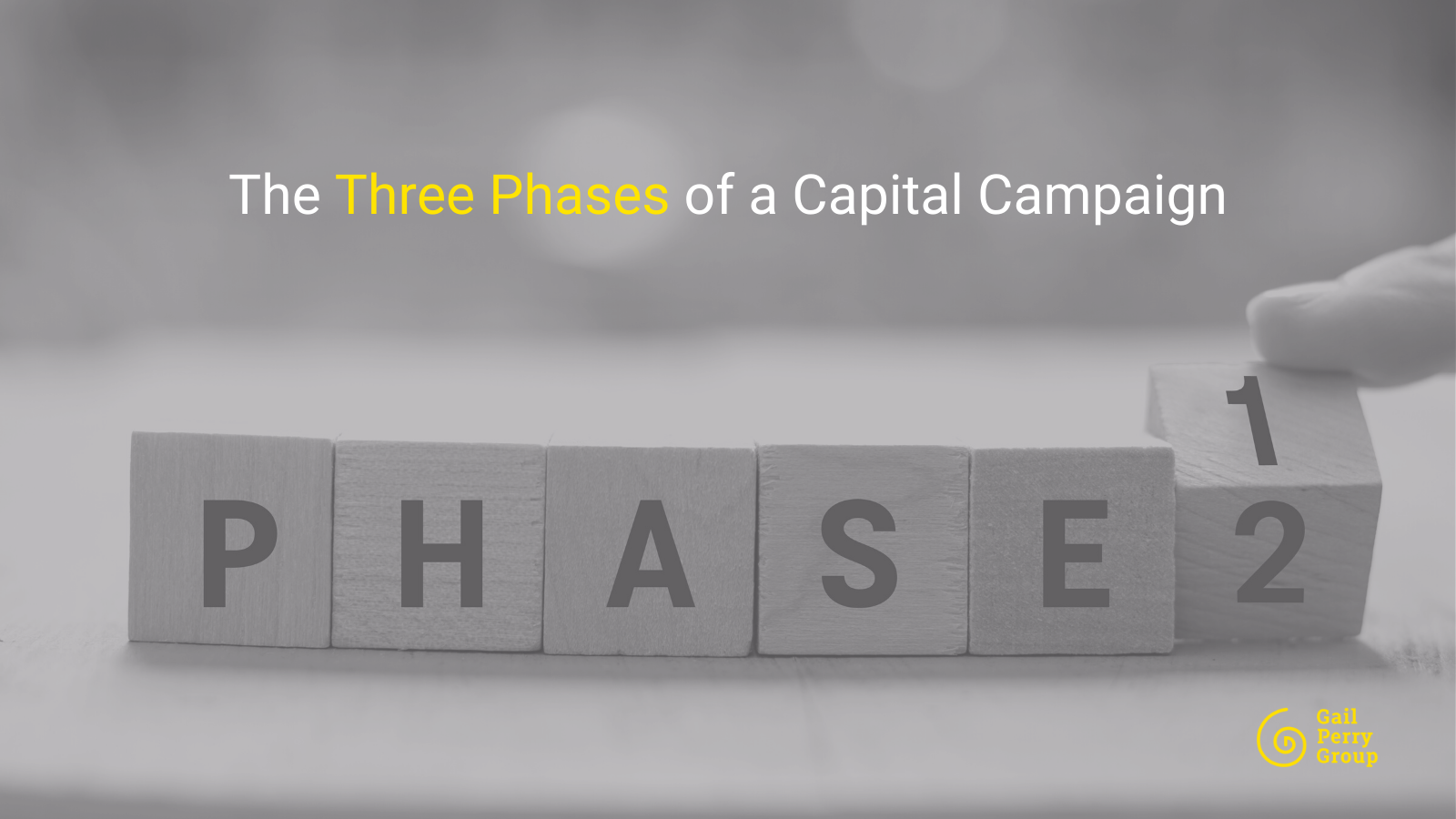 Many people ask us about the traditional three phases of a capital campaign – Campaign Planning Phase, Silent Phase, and Public Phase. It’s interesting to consider that this model, which is the standard for capital campaigns today, was developed in the 1960s and ’70s. (We question whether it still is the best format for today!) Let’s unpack the three phases of a capital campaign, as laid out by the 20th-century strategists. We hope this detailed explanation of what happens when, will help your board members and leadership understand the timing and pace that will bring success.

In this very early phase, you and your team are doing the most important work of all – your careful due diligence. Campaigns are high-stakes, high-dollar endeavors, and your organization does NOT want to fail.  During this phase, you need to firm up your campaign goal and detailed objectives, and lay down a plan and campaign structure that will help you reach your ambitious fundraising targets.

This is the time for a Feasibility Study when you use consultant-led interviews to engage your top potential donors.  These “advice conversations” will help gauge your donor’s interest in your plans. You’ll learn what it will take to elevate your project in their philanthropic priorities, and how willing they are to support your campaign. In addition, during the Campaign Planning Phase, leadership usually asks an outside consultant to assess their internal development office. It’s important to find out now if additional resources will be needed to execute a campaign. You may need to add staff, shape up your data, or strengthen your administrative and accounting processes in order to support a full-scale capital campaign. Most importantly, in the critical Campaign Planning phase, you (and your consulting team) will develop a Campaign Plan that lays out the strategy, timetable, positioning, leadership, and plan for the campaign. The plan is your roadmap to reach your financial goals.  This is when you need a seasoned consultant guiding you. As consultants, we advise our clients on all aspects of strategy. The consultant’s role is to help set up your organization for success — well before you ever ask someone for a gift.

Silent Phase of a Capital Campaign

The traditional Silent Phase of a Campaign moves you into action. It’s called a Silent Phase because the campaign is happening behind closed doors, so to speak.  This is when you are laser-focused on the top lead gifts. No time for distractions. Campaign leaders and staff will spend a majority of their time lining up the dominoes – who needs to be engaged first? Which donors should be asked in what order?  Your team is actively visiting with important donors and hopefully moving them into Gift Conversations.  We keep this phase “silent” because it’s a stealth approach. Every approach to a donor is carefully managed and customized. Your team can only handle a few of these donor approaches at a time because they require so much planning, research, and coordination. Often when one key donor steps forward, then several other donors will follow suit.   It’s important to take your time with these key lead donors, because just a handful of gifts can reach up to 50-70% of the overall campaign goal.  So you can see that it is entirely worth it to put the big public campaign on hold, while your team approaches the right donors on a step-by-step basis.

Soliciting Your Board and Campaign Leadership Committees

In addition, during this early phase of your campaign, it’s important to move forward and ask your board members and campaign leadership volunteers to make their campaign pledges. Of course, your team will want to stage these conversations carefully, so that each person is approached individually and thoughtfully.

Public Phase of a Capital Campaign

Of the three phases of a capital campaign, the Public Phase often gets the most attention.  This is the phase most people – particularly board members – are familiar with, because it is the most visible phase of a campaign. The Public Phase usually begins with a grand announcement. Often nonprofits like to stage gala events, with press releases, speeches, dinners, honorees, and even parades with marching bands.  Traditional thinking holds that this kind of gala or big event will create excitement and help to build enough momentum to carry the campaign to meet its goal. But do you know for sure?

How much should you raise before the Public Phase?

We recommend that the Campaign Announcement does not happen until 70-80% of the gifts are pledged or closed.  Here’s the reason: when your team “goes public” with the campaign, the world now knows that your institution is staking itself out publicly to reach a financial goal. Above all, you do not want to fail in front of everyone.  In fact, we don’t announce campaigns until we know where the remaining major gifts for the campaign are likely to come from. We can project our gift pipeline using our Campaign by the Numbers approach. This management tool helps our clients identify, track and close the right gifts needed to reach the campaign goal.

Mass or General Solicitation in the Public Phase?

What happens during the Public Phase?  Yes, you’ll focus on closing the remaining major gifts, but most of your energy will be on a broad-scale effort to solicit all your donors and stakeholders. This will be mass digital, direct mail, and perhaps one-on-one solicitations. The gifts now will be much smaller than your major and lead gifts closed in the Silent Phase. Just consider the effort required to close one gift of $200,000, and compare it to the effort to raise many smaller gifts that could add up to $200,000. You can see that the cost of raising this last little bit of campaign donors is quite high, especially compared to the cost to raise the first 70-80% of the campaign goal.

Bottom Line: These three phases of a capital campaign can provide the strategy to reach your ambitious financial goals.

The money doesn’t just walk in the door. It takes sophisticated planning and execution. If your organization is planning a capital campaign or expanding your major gifts program – we can help. Send an email to coaching@gailperry.com if you’d like to schedule a free strategy call with us.

Major Gift Fundraising Mistakes That Can Ruin Everything