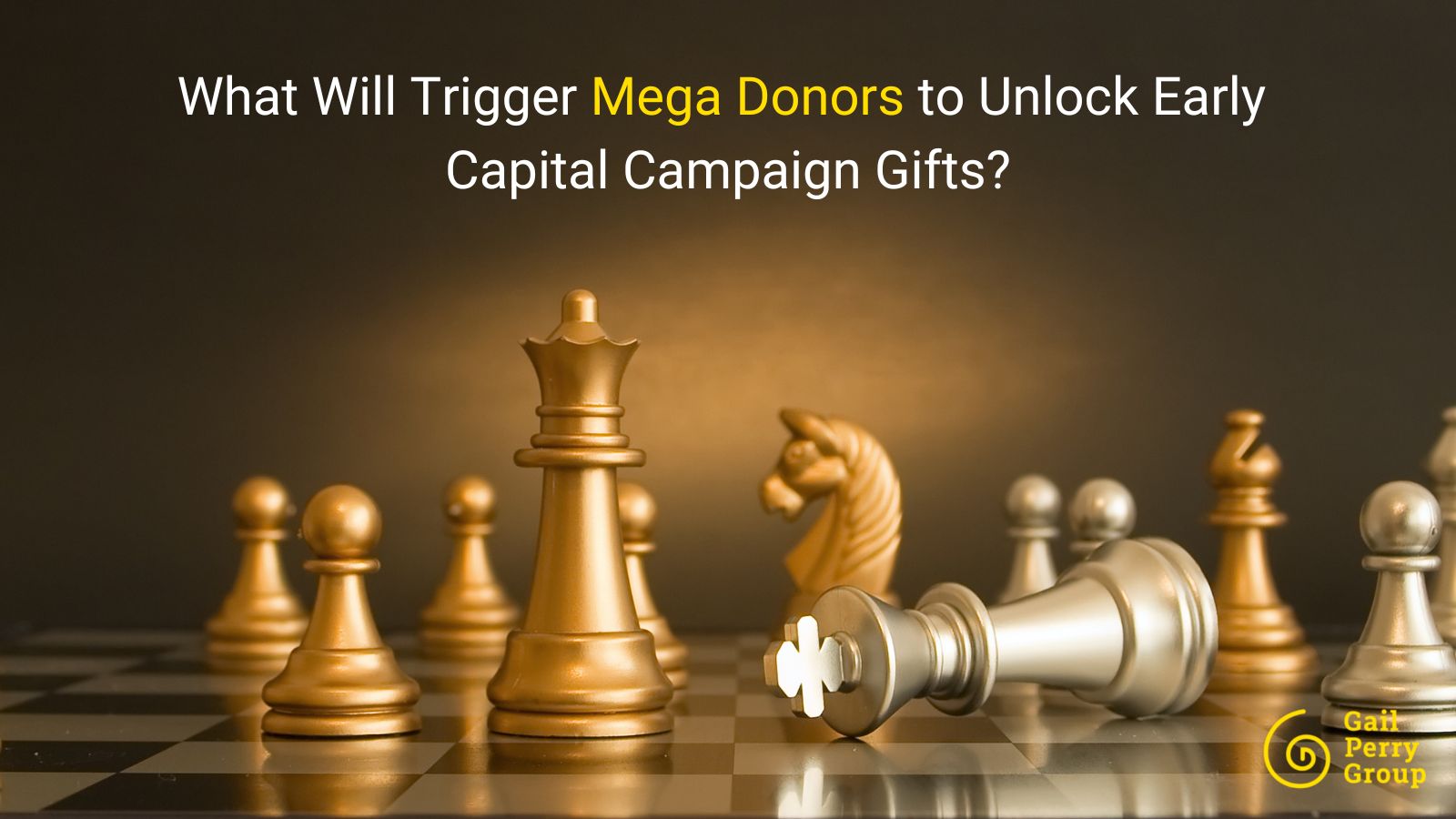 This is the question that many nonprofit leaders ask – over and over. For every capital campaign that we advise – this is often a huge question hanging in the air.

If you want to dive down into this question more, we’ll be discussing early capital campaign gifts in our open webinar on September 26th:  How to Jumpstart Your Capital Campaign and Achieve Early Success Today. Be sure to join us! You can find out more and register here.

Do you know where the lead gifts for your next capital campaign will be coming from? That’s the first question that I often ask: How close are you to the 7 and 8-figure donors on your prospect list?

Why do we focus on these mega gifts and high-net-worth donors?

Because it’s the largest, early capital campaign gifts that are often the most important. These are the gifts that set the pace for other gifts that follow. They set a giving standard that can inspire other donors to step forward.

Even more, a very large gift from a well-known supporter helps to build confidence in an institution’s campaign.

Another reason these lead gifts are important is that the gift can trigger interest from similar philanthropists, and even open doors to new donor relationships.

So, focusing on these early, lead gifts is one of the most important, most strategic activities of early campaign planning.

What does it really take to trigger early capital campaign gifts from high-net-worth donors?

There are several factors that come together to trigger an early, substantial capital campaign commitment. Among these, one of the most important causes is the magic ingredient of Influence.

What do we mean by Influence?

We want to know who can influence the donor. Who on our team or in our inside circle knows them?

Most importantly, who do we know or have access to, who CAN influence the donor?

What (or who) will incline and influence the donor to think kindly about our project – among all the other causes they like to support? What will help us rise to the top of the donor’s radar screen, so to speak?

We are trying to weave a web of influence to get the right people in the room at the right time. For example, if we can secure the support of one key influencer in a community, then that person can encourage several other people to support us.

Why is Influence so important?

It often boils down to a matter of trust. For example, does the donor trust the people running the organization?

Many gurus in the past (check out “Asking” by Jerry Panas) have found that mega-donors will not give unless they know, trust and even like the organization’s leaders.

That means that board members matter.

If you are planning a campaign, you want to build your board with people who have excellent networks in the philanthropic community.

In addition, you want them to be trusted by major donors in your community.

Best of all, if you have board members who are major donors themselves, they can help open doors to other philanthropists.

It’s like assembling the pieces of the puzzle. Who needs to be involved, and when, in order to influence a very special lead donor?

Here’s a case in point: For some of our capital campaigns around the country, we’ve been able to secure the help (and endorsement) of a former state governor.

The plan to get in front of the governor was laborious and exacting. We had to have the right person call the former governor and ask them to make a key phone call. The retired governor understood how important influence can be to secure an important supporter.

An Influence Strategy is a step-by-step process.

Our clients often have many calls with other people before they ever approach a lead donor.

These were advice visits and calls, brainstorming the appropriate process – who, what, when and where? In what order? Who calls whom first?

Working through Board members.

Often, we will have advice visits with key board members, bringing them a specially curated short prospect list for review and discussion.

What I mean by a curated list, is that we select about 5-10 specific prospects whom we think the board member can help with.

So the short prospect list is customized specifically for each board member, usually with the names of donors who may be in the board member’s sphere of influence.

It takes a lot of strategy to close early capital campaign gifts. An Influence Strategy can help secure the support of your mega leadership donors.

As always, it is a pleasure to share our weekly insights with you as we cover important fundraising strategies.  If your organization is planning a capital campaign or expanding your major gifts program – we can help. Send an email to coaching@gailperry.com if you’d like to schedule a free strategy call with us.

Honest Questions to Consider About Your Organization’s Fundraising St...

How is Post-COVID Fundraising Different?
Scroll to top