Fundraising Barriers: The Idea of “Fundraising” is All Wrong! 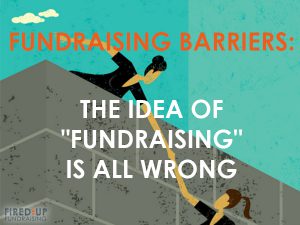 What are the fundraising barriers that are holding you back – even inside your own organization?

I bet there are plenty!

Are you and your team working, perhaps, within a whole sea of hindrances?

Many things happen inside nonprofits that don’t serve fundraising.

What’s more, some of this stuff actively works against your – and your organization’s – overall success. No kidding!

And I’ll tell you WHY all this happens, too.

Too many people think “fundraising” is distasteful.

The problem is really with how people actually think about “fundraising.”

The way we think about “fundraising” is all wrong!

Fundraising could actually be considered as an important, even noble activity.

Because of people’s hidden, private attitudes, fundraising often gets relegated off into a corner – inside a silo.

Because people inside your organization think fundraising is yucky, your donors may be ignored.  And we all know what happens then!

Here’s what happens when attitudes about “fundraising” are on the wrong track:

When people make up nasty myths like fundraising is embarrassing and demeaning, then  . . .

What kind of results does this attitude bring?

Fundraising barriers: Organizational structure — You are stuck in a silo.

This is when you and all your lovely fundraising initiatives are relegated into some isolated corner of your organization.

You work alone, without the cooperation, involvement and support of your colleagues.

What kind of results does this structure bring?

Too many fundraisers tell me that their revenue goal was simply set from above by their CEO, executive team and/or board members.

You can’t just set a team’s goals for them with little or no input from the team itself. This is nothing but classic mismanagement.

When people inside your organization don’t really understand or support fundraising, then budgeting is often a struggle.

Why would decision-makers hire more fundraising staffers when they are not paying attention to the staff they already have?

It’s time to change the idea of what “fundraising” really is.  (See my post The New Paradigm: From Fundraising to Philanthropy.”

It’s time for a culture shift! (See:  Beyond Fundraising: What Does it Mean to Build a Culture of Philanthropy?)

When we do this, THEN we can start to get our entire organizations behind us.

THEN we can  create that positive culture of philanthropy that supports everyone, and brings in so very much more money.

Next week, I’ll share some clear steps you can take to start building a true culture of philanthropy inside your organization.

Get in touch
7 Rules for Successfully Soliciting Board Members

Redefine “Fundraising” and You Can Build a Culture of Philanthr...
Scroll to top