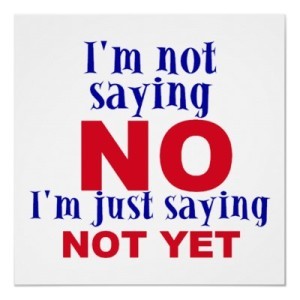 Are you chomping at the bit to get moving on a capital campaign? Make sure you have done your homework before you start interviewing capital campaign consultants.  Don’t rush to pick up the phone!

Today’s post is written by two of us: Andrea Kihlstedt (who wrote the BOOK on capital campaigns) and myself.

Hiring your consultant too quickly can be a huge waste of your organization’s money.

Because your consultant needs something to work with when he or she walks in the door.

If the consultant finds a blank slate with no cultivated donors, no real plans laid, there won’t be a lot to work with.

Then you’ve just wasted a big chunk of money on a feasibility study.

It’s disappointing to consultants, too, when we have interviews with potential donors who are not familiar with the project and not close to the organization.  There is nothing to talk about!

(Don’t get me wrong, I really DO believe in campaign consultants – just bring them in at the right time!)

This sounds obvious, doesn’t it? But it’s not.

Just because your organization needs a new building, for example, doesn’t mean that that’s the only thing you’re going to raise money for: Go ahead and develop a rough schematic well in advance!

And what other things might you want to include in your campaign objectives?

What about endowment? A special building maintenance fund or money for equipment? What about including start-up costs for the new programs you’ll have in your new building?

Identify all the different “funding objectives” or purposes that your campaign might include.

Once you have a sense of what you might want to raise money for, you can put some numbers next to each funding objective. Then you can come up with a nice, simple round number that’ll be a starting place for your campaign planning.

When you develop a tentative goal, be sure to consider how much money you’ve raised annually in the past. (It’s probably not wise for your campaign goal to be more than ten times your annual fundraising totals.) Go ahead and set a preliminary dollar goal as soon as you can.

Once you start talking numbers, you’ll find a sweet spot; a number that impresses people but doesn’t make them gasp at your foolishness.

(Now,  a little foolishness is not all that bad.  It’s much easier to come down later than it is to go up, so reach on the high side to start.)

Create a Gift Range Chart. This little chart will be a remarkable planning tool for you.

Once you have decided on a preliminary capital campaign goal, start creating a chart that will show how many gifts you’ll need of what sizes to reach that goal.

Know that a gift range chart for the same goal will vary from organization to organization depending on the size of your prospect list and the potential of your largest donors.

Before you start interviewing potential consultants, make sure your board is well-informed about the prospects and potential for your campaign.

That means that you will have to work with board members independently and together on your planning.

You should also find a way to educate board members about what a capital campaign entails, both for the organization and for them individually and as a group.

Remember, even after you’ve taken these five steps, hiring a consultant will still require a significant financial investment.

And if your board is paying attention — and they should be! — they’ll want to be well informed about your campaign prospects before committing to that investment.

5.    Involve your most important donors in your capital campaign planning.

During these beginning steps in your planning, make a list of your ten to twenty most important donors – the ones who are most likely to make the top ten gifts to your campaign.

Then develop a plan to involve each of these donors in the planning process.

This can range from taking a donor to lunch to let her know what you’re working on to asking one or more donors to serve on a pre-campaign planning committee. Get your lead donors involved with your planning early.

If one of your top donors is involved in real estate, you might ask his advice on choosing a new location for your new building.

You get the idea. Don’t keep your most important donors at arm’s length through the planning process – instead, use your planning phase to draw them in. The pre-planning phase is a wonderfully exciting time to involve your donor prospects.

And there you have them – the five things you need to do before hiring a capital campaign consultant!

Take these steps first and you’ll not only save time and money, but you’ll also have your campaign on the early road to success!

And your consultant will be happy she has so much to work with when she walks in the door! YES!

Get in touch
#1 Strategy for Fundraising Appeals This Year: Make Your Donor the Hero