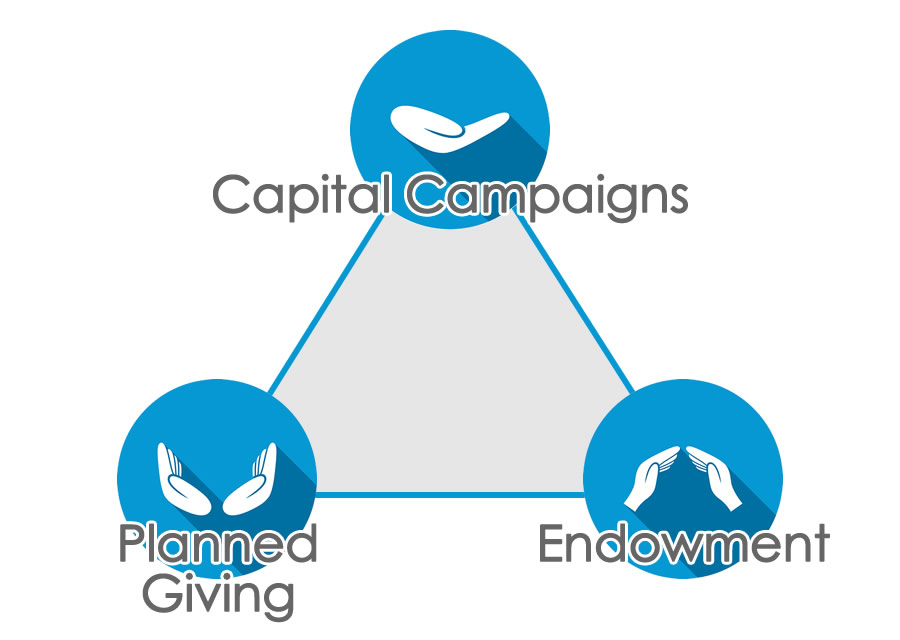 One question we hear a lot is: “What’s the best way to raise endowment funds?”

Especially if you are in a capital campaign, you probably have planned gifts and endowments on your mind.

Here are some simple ideas that might help you understand how capital campaigns, endowment funding and planned giving fit together… and how they don’t.

It is simply more difficult to raise endowment money in a campaign than any other type of capital campaign gift.

People with lots of money usually prefer to hold on to it and manage it themselves, rather than turning it over to you.

And if they do make gifts, they typically want to see their money create an immediate change for the better — not have their money stored away for you to control.

You may have heard this from would-be endowment donors.

It’s something we’re hearing more and more as donors seek to make a faster impact with their philanthropy.

Bequests are the Best Way to Raise Endowment Funds

Hands down, most endowments are funded by bequests.

This is the way organizations build their endowments, from lovely donors who put them in their wills.  Then when the donor passes away, the organization becomes the lucky beneficiary.

Often donors will bequeath a small percentage of their estate to go to their favorite nonprofit.

(I have my school and my church written into my will for a small remainder percentage. Do you have bequests in your own will?)

How do you get your organization included in someone’s will?

Here’s the challenge: writing a new will isn’t something most people do every day.

So your organization needs to be on top of your donor’s mind. You have to be a constant, pleasant presence, cheerfully reminding ALL YOUR DONORS about this opportunity.

AND you need to be continually treating these donors with love and care.

Because if you are not in touch with your full donor base – including smaller donors, then you may miss out on the biggest fundraising opportunities of all.

Who are the most likely bequest donors?

You’d be surprised. The top indicator of a bequest donor is longevity of giving.

That means your bequest donors just might be your small donors – who are probably not at the top of your radar screen.

So if you have someone who is giving you $25/year for 10 or more years, then you have a great chance of being in their will.

1. In an campaign, set a modest goal for endowment – to be raised thru cash, pledges or irrevocable planned gifts.

This is for the occasional donors who are keen on building your endowment now.

It’s good to give them a place in your campaign.

But don’t make the endowment goal too high unless you know a donor is planning a big endowment gift.  Remember this is the hardest money to raise!

2. Set non-financial goals for your campaign to encourage people to include your organization in their wills.

You might, for example, set a goal to get 20 (or some other number) people to include your organization in their will and send you documentation.

I like having an official and specific goal like this – a certain number of bequest commitments that you are targeting to secure during your campaign.

It will give your solicitors a great opportunity to talk about planned giving with appropriate donors when they solicit their more immediate cash gifts and pledges.

Here’s how to ask for a major gift and a planned gift in 4 easy steps.

Here’s how to nudge donors toward a planned gift by telling a bequest story.

What are YOUR experiences with planned and endowment fundraising? Let us know with a comment!

This post was co-written by Andrea Kihlstedt and Gail Perry.

Are You Really Ready For a Capital Campaign?
Scroll to top