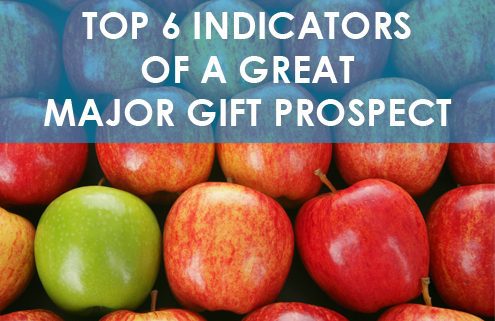 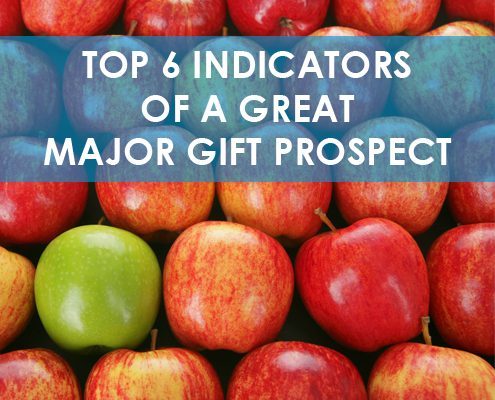 When you’re prospecting for major gifts, the key to success for any fundraiser is finding the right donors.

Not just those who care about your organization, but those who can give a significant contribution to your nonprofit. A.K.A., major donors.

(We have a terrific guest post today from Ryan Woroniecki of DonorSearch. Here goes:)

So what makes these donors stand out from the crowd?

1. Past charitable giving to your organization

Of all factors analyzed, past giving to a nonprofit is the strongest predictor of future philanthropy. The evidence is right there in the data.

Too many nonprofits don’t place enough emphasis on donor retention, and, as a result, miss out on the opportunity to upgrade the donors they already know and love to higher giving levels.

To see who has the most potential in your data, check out your donors’ RFM scores.

An RFM score factors in three pieces of data:

Review your list of existing donors and rank them according to each of these three factors (on a suggested scale of 1-100).

After every factor is sorted and rated, the three ratings are added up to make the RFM total — and voila! The closer the score is to 300, the better your relationship is with that donor.

That is, if you ask them.

2. Past charitable giving to other nonprofit organizations

Philanthropic giving to other nonprofit organizations is the second most predictive sign of future giving.

If you think about it, it makes sense – people who are already philanthropic are more likely than the average person to give charitably.

And philanthropy is important (it’s even more important than wealth or giving capacity!).

What’s particularly interesting is how powerful a predictor this can be.

When you are prospecting for major gifts, look for individuals who have made a gift of over $100k to a nonprofit.

They are 32 times more likely to make a charitable donation elsewhere.

3. Involvement in nonprofits as a foundation trustee or director

Based on the analysis of charitable giving to over 400 nonprofits, a prospect’s participation as a foundation trustee or nonprofit director is a more powerful signal of future philanthropy than any wealth indicator.

These prospects understand the importance of philanthropy and the work nonprofits do because they have firsthand experience.

When you make your fundraising case to them, they’re more likely to understand where you’re coming from.

Plus, these prospects are well-connected.

Any given foundation trustee or board member is bound to have ties to other members of their foundation or nonprofit board — which means you can get an “in” with more high-value prospects.

Once you’ve developed relationships with a group of foundation trustees or board members, you can ask them to make introductions to other top-notch prospects.

Political giving is another excellent predictor of future giving.

These numbers are more than a glimpse into a donor’s wealth.

It’s true that the size of a prospect’s past political gifts can clue you in to the giving capacity of a particular candidate.

However, political giving can also signify a donor’s philanthropic inclinations as well.

Anyone who gives a political donation is clearly open to making a donation to a cause they feel passionate about.

If you can strike a similar chord in your communications with those prospects, you’ll have a greater chance of securing a gift.

Real estate ownership indicates a potential donor’s wealth. Someone who owns valuable properties may have the capacity to give a large, high-impact donation (1 + 1 = 2, and so on).

However, real estate ownership also indicates a greater chance of giving, in general!

When you are prospecting for major gifts, look for someone who owns $2+ million worth of real estate. They are is 17 times more likely to give philanthropically than the average person.

The correlation between real estate ownership and philanthropy cannot be ignored. For one, it can point you toward high-value prospects.

At the same time, it can also help you identify supporters who can offer future venue space or even planned gifts.

Who knows? Maybe the lovely donor with a beachfront property would be willing to host a party to celebrate your next capital campaign, too.

Business affiliations can give you insight into a donor’s professional relationships.

Of course, there’s the obvious correlation between salary and giving capacity.

Even more, a donor’s position in their company tells you if they may be able to influence their company’s philanthropy program.

With the right knowledge about your prospect’s connections, you may be able to secure:

With these 5 indicators under your belt, you’ll be hard-pressed to miss out on another major donor prospect!

Now that you know what to look for when you are prospecting for major gifts, check out this article on where to look for major donors and high-level prospects!

Ryan Woroniecki is the Vice President of Strategic Partnerships at DonorSearch, a prospect research, screening, and analytics company that focuses on proven philanthropy. He has worked with hundreds of nonprofits and is a member of APRA-MD. When he isn’t working, he is an avid kickball player.