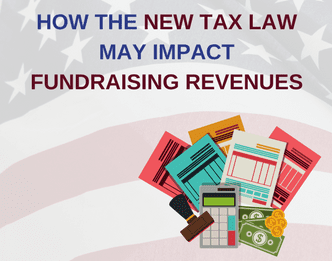 The new 2017 tax law in the U.S. alters many of the tax incentives that encourage individual giving.

Clearly, tax incentives are usually not most important reason most people give.

But the incentives may contribute to how much donors give, how often and what types of gifts they make.

Government policy has stepped back from encouraging private support of the nonprofit sector. We might say, then, that a large section of the philanthropic landscape has changed.

One thing we can be sure about, corporations and the wealthy got a significant new reduction in their taxes.

So lets discuss the good news first. There may be a silver lining in this after all – offering mega opportunities for new major gifts to flow into your nonprofit.

As Forbes noted, the wealthiest taxpayers were the biggest beneficiaries of the bill. Whether we like it or not, policies in the US are helping to concentrate wealth into the hands of a small group of individuals.

All in all, most of the wealthy will be feeling wealthier, particularly those earning over $1 million a year. When donors “feel” more flush, they tend to give more readily.

We would say — from a fundraising standpoint, that people at the top of our donor pyramid are in an excellent financial position to consider large major gifts.

Your Takeaways: Major Gifts Will Be More Available Than Ever

1. Chat with your major donors about the tax bill.

Just ask them what they are thinking about the new rules and how they think the new laws might impact them. You can open the door to a discussion about their philanthropy plans in the future.

If you ever thought about seriously committing to a systematic, thorough major gift fundraising effort, NOW is the time. Take advantage of this unusual timing. Join my 2018 Major Gifts Coaching group and I’ll work with you all year to set up a profitable, productive major gift program at your nonprofit.

3. Work to establish YOUR organization as your donors’ favorite charity.

Then you’ll be first in line for their gifts, support and participation. A 2012 survey by NTEN found almost half of donors surveyed gave most of their gifts to the charity where they felt “most connected.”

2017 Tax Law: Reduction of the Estate Tax: Impact on Bequests

Under the new 2017 tax law law, the estate tax exemption is almost doubled. It’s offering exemptions for estates of up to $11 million and $22 million for married couples. This drastic reduction of the estate tax will surely dampen donors’ interest in making charitable bequests and setting up trusts.

According to Giving USA, charitable bequests were 8% of all giving in 2016, totaling around $30 billion.

The Congressional Budget Office has estimated that eliminating the estate tax could reduce bequests by 16-28%.

The Center for American Progress estimated that the current tax law changes would reduce the amount Americans give to charity in their wills by $7.8 billion in 2024.

Case in point: When the estate tax was temporarily repealed in 2010, charitable bequests declined by 37%.

Your Takeaways: Bequests are at Risk.

1. Your planned gifts will come from donors who absolutely love you.

They will give out of purpose and commitment, and their long term relationship with you.

Bequests are still out there for your nonprofit, but #donorlove is what will bring them in.

Good old-fashioned fundraising, focusing on loving and engaging with your top donors – will save the day.

2017 Tax Law: Higher Standard Deduction and its Impact on Small and Mid-Level Donors

We now have a new, much higher standard deduction for individuals, coupled with a loss of personal exemptions.

Because of the much higher standard deduction, millions of Americans will not be itemizing their taxes in the future.

For those who itemized in the past, charitable gifts could be a major source of tax deductions. But now, the number of Americans who itemize is predicted to drop from the current level of 30%, down to only 5%. (Urban-Brookings Tax Policy Center)

So we’re looking at 25% of ALL taxpayers will be no longer itemizing.

The important group of mid-level donors giving in the $1,000 – $10,000 ranges will probably be re-thinking their giving in the light of this new law.

Your Takeaways: Tax deductions will not longer be an incentive for giving for this group of people. The tax incentive to give is gone.

1. It’s not looking good for smaller and mid-level gifts.

Philanthropy expert Martha H. Schumacher, President of Hazen, Inc in Washington, DC, and Chair-Elect of the Association of Fundraising Professionals, said the new tax plan is expected to have as much as a $13B – $20B negative impact on charitable giving in America.

2. Donors will give out of concern, commitment, and their wish to help.

Again, good basic fundraising will save the day. Learn how to engage your donors. Make them happy that they are giving. Be sure they love you. And these people will  give despite the loss of the tax advantage.

On top of the devastating impact of the new tax law, nonprofits are facing potential slashes in  appropriations and funding from government sources.

The Republican administration is pushing for continued reductions in community development block grants and deep cuts to social safety net programs. These are the programs that are carried out by your local nonprofits down the street that help the sick and the homeless.

The federal government is likely to push for reduced spending on social programs in order to make up the deficit resulting from tax cuts for the wealthy. Get ready, because I think it’s coming!

Of course you should treat your elected officials at the state, local, and federal level with care and perhaps even #donorlove. Treat them like the VIP major gift prospects and donors that they are. Invite them in to see your work. Let them take credit for your good work (they love that!)

Then you’ll be among their list of favorite charities who might get favored when it comes time for government funding.

The jury is still out on the impact on corporate donations.

We’ve seen several large companies, such as Wells Fargo,  publicly announce large increases in their contributions budgets as a result of the new 2017 tax law.

I’m betting that corporate gifts may increase. And that means when you are seeking sponsors for your events, perhaps the door will be more open to you than in the past.

Companies drastically reduced giving during the Great Recession. It’s time for them to step back up to the plate as important community and national leaders.

Your Takeaway: Ask your local companies how the tax law might impact their future giving decisions.

It will be the first step to a warm, friendly relationship with them for 2018.

But good, basic smart fundraising practices will help you win in the end.

Focus more clearly than ever in showing your donors how THEY make an impact thru their gifts to your organization.

Is This the Reason You Aren’t Raising Major Gifts?
Scroll to top