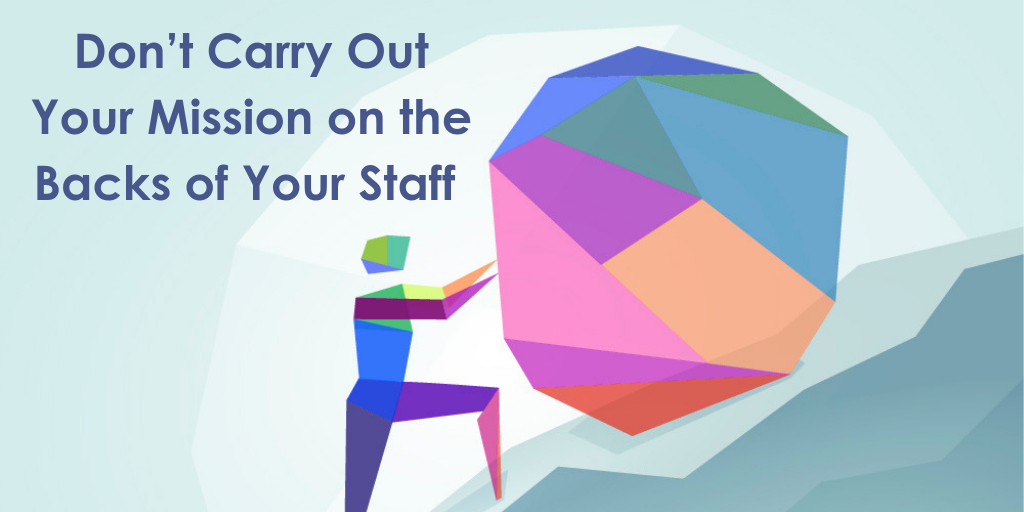 Julian was a superstar young staffer on our client’s Annual Fund team.

He doubled his area’s contributions in his first year. Using his social and digital skills, he ramped up donor engagement and gifts.

In only six weeks, Julian single-handedly pulled off a Giving Day that raised almost $75,000. He was a fearless fundraiser. And he was pulling in tons of money for his nonprofit.

But Julian was underpaid. Everyone knew it. His organization was, in a weird way, proud of the fact that their salaries were so low. (??)

His boss kept saying that they’d lose him soon if they didn’t give him a raise.

Julian was not happy, because he could not support his family on his meager salary.

He finally, in desperation, took on a second job to make ends meet – and that meant more time away from his young family.

He felt stressed, overworked, unappreciated, and suffered from lack of sleep. Even though he was a high-valued “superstar.”

Didn’t even look back.

Out the door walked institutional memory, productive donor relationships and a well-trained fundraiser who was generating over $250,000 a year for his organization.

And what did our client do? First, his exhausted boss mourned. Then she had to deal with the loss of revenue because he was gone.

Julian’s position was empty for 6 months.

His boss spent about 80 hours over the next few months to do the search, interview people, check references and hire someone. So she was not able to be productive for all that time.

Other staffers had to handle his job for months, while the position was empty, adding serious stress to their own lives.

Finally, when the new person came in, they had a learning curve to get up to speed. They were not productive for another 6 months. It was another year after that before they equalled Julian’s financial results.

This scenario is playing out over and over in nonprofits across the world.

Short-sighted board members, charity “watchdogs,” inflexible policies, outdated practices all combine to create a working environment based in poverty and scarcity.

It’s like we expect our staffers to take a vow of poverty in order to work at our mission.

A recent cover story in the Chronicle of Philanthropy, “Breakdown – How Low Pay Undermines Nonprofits” pointed to deep discontent with nonprofit compensation.

And just like Julian in our story above, fundraisers across the board are leaving their jobs for higher pay – and sometimes leaving our sector altogether.

A recent Harris Poll survey for AFP and the Chronicle of fundraisers found:

“Only about one-third of the respondents said they planned to be at their current job in three years.”

Many funders and donors contribute to the poverty mentality by choosing to fund direct program costs only. Or they will fund a small overhead rate – one that drives the nonprofit to its knees.

According to the Nonprofit Quarterly:

In Nonprofit Finance Fund’s Annual State of the Nonprofit Sector Survey 2015, only 7% of nonprofits report that foundations always cover the full cost of the projects they fund.

Keeping overhead low seems to be paramount. Board members, funders, CEO’s, even CFO’s are trained to think that administrative costs are detrimental. Salaries need to be as low as possible.

Overhead is a terrible thing?

According to the Chronicle article about low pay, even if nonprofit could pay their employees more, they are often afraid to.

For decades, low overhead — the amount spent on salaries, administrative costs, and other expenses — has been a proxy for effectiveness.

Who pays to generate the essential funding for all of this?

I just don’t understand why are we so afraid of investing in our infrastructure, in our effectiveness and our efficiency.

If you invest more money in fundraising then you will raise far, far more money. Funds to carry out your mission.

The result? Not enough money to run a solid organization.

If we are truly devoted to making the world a better place, it should start at home.

That means living wages for our staff.

It also means positive work environments, happy, healthy workplaces, giving people the resources to do their jobs, expectations that are set in reality, and appreciation and respect from colleagues and board members.

The board has a responsibility to ensure that the organization they govern has adequate resources to carry out its mission.

Yes, these resources include staff – your staff are your most valuable resource to get the mission done.

They carry out the mission, and they bring in the revenue to run your mission.

Do you know organizations that carry out their missions by underpaying their staff?

Get in touch
How to Appreciate Your Fundraising Team