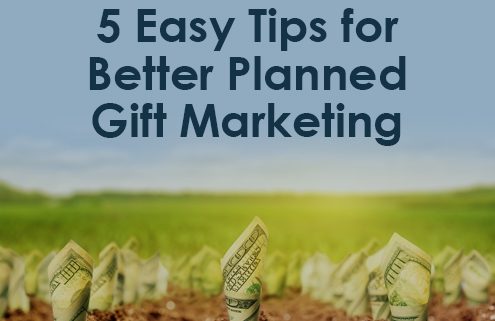 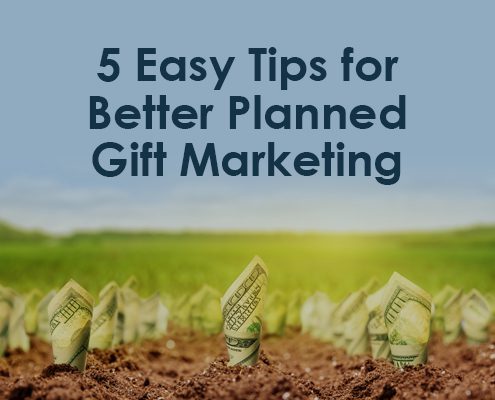 Here’s some good news! Planned gift marketing does not always have to be difficult.

Here are some simple, no-cost adjustments that will dramatically enhance your planned gift marketing efforts and generate more support for your organization.

If you want more training on planned giving, be sure to join our Planned Giving Intensive to help you establish a constant flow of generous, bequest gifts to your nonprofit.

Check out these five helpful tips from planned giving expert Michael J. Rosen – and get ready to bring in more planned-gift support for your organization:

The five most common planned gifts also happen to be the easiest to ask for and the least complex for you and your donors:

While you should be somewhat prepared to speak with a prospect or donor about complex giving opportunities such as Trusts, the reality is that those opportunities will be exceedingly rare unless you work for a large nonprofit.

Even then, complex planned gifts will remain infrequent.

You could also consider offering the more complex Charitable Gift Annuities, either directly or through a third party.

2. Do NOT Talk to Your Prospects and Donors about “Planned Giving.”

A Stelter Company study found that 63 percent of Americans over the age of 30 have no familiarity with the term “Planned Giving.”

For the 37 percent who claim to be familiar with the term, we have no way of knowing if, in fact, they know what the term truly means.

We all think that “Planned Giving” is a reasonable, inside-the-development-office catchall term to describe, well, Planned Giving.

Because “Planned Giving” is essentially a meaningless term for most prospects and donors, you’re far better off asking for a gift involving a specific method.

For example, if you want someone to include your charity in her will, talk about that.

When asked, during a study by James, if they would “consider making a Bequest gift,” 18 percent of prospects responded, “I might be/am definitely interested.”

By contrast, when asked to consider a “gift in your Will,” 28 percent expressed interest!

4. Create a Better Button, Tab, or Link Phrase on Your Website.

Typically, nonprofits will have a button or tab on their website or use a link phrase that says “Planned Giving.”

Unfortunately, that does little to inspire prospects to click through to the Planned Giving page.

Another study by James concluded that the best term is: “Other Ways to Give Smarter.”

If you use this phrase, you’ll get more people to click through, and they’ll be more satisfied with the content when they do.

5. Get on the Bandwagon.

A study in the UK involved 3,000 actual testators, not simply survey takers.

They were randomly placed into one of three groups when speaking with an estate planner:

When the estate planner did not raise the subject of charitable giving, five percent of testators initiated the inclusion of at least one charity (average gift of $5,610), according to the Cabinet Office of Behavioural Insights Team.

However, members of the third group, which heard that others were including charities in their Will, were even more likely to make a commitment with 15.4 percent including at least one charity in their estate plan (average gift $11,333).

The commercial sector refers to the simple phrasing used with the third group as the bandwagon effect or social-norm effect.

People are more likely to take action
if they know others are already doing so.

As the research demonstrates, this principle holds true when encouraging people to include a charity in their estate plan.

Not only are they more likely to make a commitment, the size of that commitment is substantially greater when bandwagon language is used.

Use straightforward language, because it makes the idea of “Planned Giving” relatable.

Thanks to our guest contributor!

Michael J. Rosen, President of ML Innovations, Inc., helps nonprofits realize their annual fund and planned giving potential. He is the author of the best-selling book Donor-Centered Planned Gift Marketing, winner of the prestigious AFP-Skystone Prize and listed on the official CFRE International Resource Reading List. He is also the publisher of the top-rated blog Michael Rosen Says…  . You can reach Michael at mrosen@mlinnovations.com.

If you want more training on planned giving, be sure to join our Planned Giving Intensive to help you establish a constant flow of generous, bequest gifts to your nonprofit.

Get in touch
Is Your Nonprofit’s Legacy Society Dreary . . . or Dynamic?

Checklist for Planned Giving: What Tools Do You Really Need?
Scroll to top