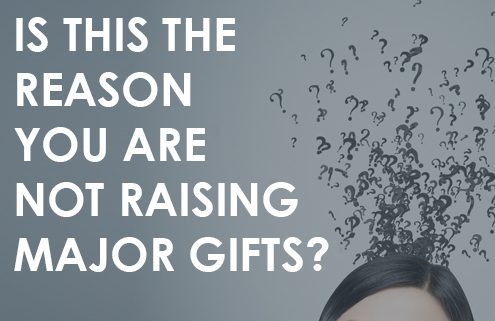 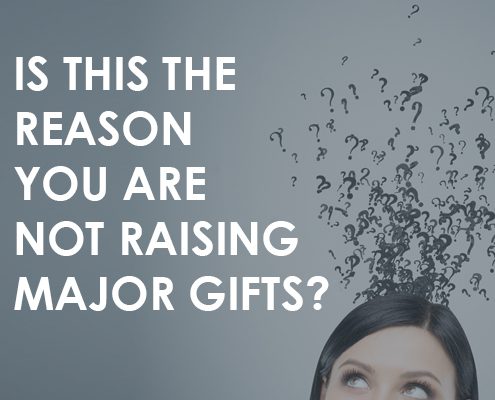 All nonprofits want to excel at major gifts fundraising. Or don’t they?

In my 30 years in major gifts fundraising, I have seen familiar roadblocks get thrown up to keep money from flowing into the organization.

How could any nonprofit not want to pull in the funding that is really out there?

In many organizations — attitudes and leadership issues are what’s really hold major gifts fundraising back.

Here are 5 reasons that your major gifts fundraising efforts may not be operating at full steam.

Change these, and you’ll probably be able to bring in so very much more money!

These reasons are why I created my Major Gifts Coaching program – to help leaders understand how major gifts fundraising really works, and give them the training and support to actually implement a successful major gifts effort.

If you are interested in coaching for this year, send in a Letter of Interest, and we’ll see if it’s is a good fit for you.

Major Gifts Coaching for 2018 closes out on January 24th, so don’t delay if you are interested. We’ll be starting our work together on Feb 15th.

1. Attitude: You may have an organizational culture that does not think major gifts fundraising is important.

In some organizations, fundraising is the last thing people want to discuss. It’s the yucky stuff.

People look down on fundraising as “dirty and demeaning work.”

The organization as a whole believes that fundraising is important to the mission,

and they believe that donors themselves are important partners in your work.

If people believe fundraising is an important component of your overall mission, then fundraising staff, strategy and programming are not relegated to the last thing on the list.

Instead they are near the front.

Could it really be that it’s attitudes — and people’s thinking — that hold us back?

Somewhere underneath it all, there is this huge fear of fundraising – particularly major gifts fundraising.

People who think fundraising is distasteful and demeaning – are silenced!

When the organization’s leaders finally understand how major gifts fundraising works, they are willing to embrace it and fully participate.

I see a lot of lip service to the “idea” of major gifts.

But the people in charge don’t make the time. And/or they don’t commit the resources.

Everyone helps out. The board members help open doors, engage with donors and even ask when appropriate.

Fundraisers are not just left out there in the cold and expected to do the job by themselves.

Program staffers help by sharing their field work with donors.

Want more? Check out my post: “What keeps 1200 fundraisers up at night.”

I worked with the board of a large hospital system last weekend. There were lots of sophisticated, connected people in the room – who were really nervous about major gift fundraising.

But these people who finally got it – they understood that:

Major gifts is a long term process. It takes patience and time.

It is not about “selling” or “arm-twisting.” Instead it’s about listening to the donor.

There are many roles in engaging with donors that leaders can play. They don’t have to all be engaged in soliciting.

5. Reluctance to commit the resources to major gifts.

Major gift fundraising is the most effective way – and the most efficient way to raise money.

We all know the data: Fundraising events are the most time-intensive, least profitable way to raise money.

And major gifts fundraising is THE most highly profitable way to bring in funding.

Major gifts fundraising takes the least effort and brings in the biggest return.

So it just astonishes me to see nonprofit leaders prefer refuse to invest in major gifts. :(

They’d rather focus on events and mailings.

And you know why. It’s because they are afraid.

And they don’t understand that major gifts fundraising is fun and even joyful!

Perhaps some attitude adjustment will help people get over their fear, and realize that this can really be fun!

It might just be people’s attitudes that are holding you back!

What do YOU think is holding your organization back?

How to Craft a Killer Thank You Letter
Scroll to top